Home > Uncategorized > Just When We Thought It Might Change

With the closing of the local coal fired power plants, we had hoped that the mountains of coal that have lined the Calumet river would go away or at least diminish in size.  For decades, residents living near the storage facilities have complained about dust on their property and expressed concerns about the air that they breathed.  Contrarily, it appears the coal will be replaced with pet coke and the amount is sure to be increased due to BP’s refinery expansion in Whiting Indiana.  Our hopes of a cleaner, healthier Southeast side were dashed.

In the past, we expressed our concerns about this situation to visiting EPA and IEPA officials, but nothing much came of them.   This time SETF contacted our local officials and took them on a tour of the area pointing out the amount of coal and pet coke and the impacts it had on the community. Vice President Tom Shepherd  had worked closely with members of the Clean Power Coalition and was able to engage some of the organizations in this matter with us.

As then came the infamous photo of pet coke dust blowing in thick black clouds carried away into the neighborhood on the winds of a storm.

As a result of support from organizations like the Natural Resource Defense Council, the Illinois Environmental Council, Environmental Law and Policy Center and other groups, we were able to produce a video that lead to all kinds of media coverage.  The issue was timely as earlier this year, residents in Detroit complained about pet coke dust blowing over them from piles along the Detroit river.  It turns out what we thought was a local issue is actually much bigger.

Go her to read about our latest efforts and the communities concerns about the pet coke.

and watch this here

and this is the photo of dust blanking the neighborhood taken by Anthony Martinez of Rising in Social Equality that ignited the fire so to speak: 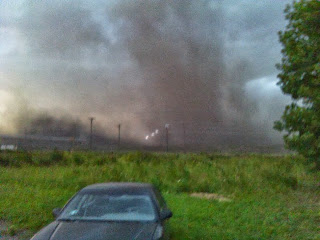