0
Tweet
134th and Ave. K
Uncategorized
Property that was identified in the Calumet Open Space Reserve plan for preservation and that was once targeted for development has now been made available by the owner Benjamin Kadish of Avenue K Land LLC.  The property sits between Powderhorn and Wolf Lakes and could serve as a link between the two.
On Monday, representatives from IDNR, the Forest Preserve, the Army Corp of Engineers, the Calumet Ecological Park Association and the Southeast Environmental Task Force, toured the property with Alderman Pope and owner Benjamin Kadish.   The purpose of the tour was to view
the property and it’s parameters for purchase consideration by the Forest Preserve District.  This was  but a preliminary step in the process and there is still much to do before a final decision can be made.
Group walking the perimeter of the property. 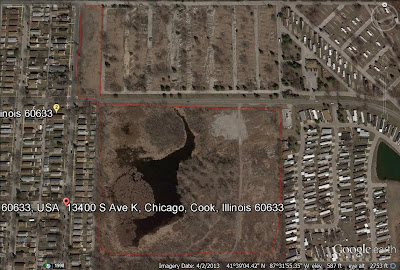 Property for consideration is outlined in red.